A note from Sara on January 24, 2020:
Our Barred Owl “Odin” has been retired from his role as an animal ambassador. Being an ambassador can be a stressful time for owls, and over the last few months we have noticed he hasn’t been willing to participate in his training and programs. We like to give our animals choice as much as possible, and I decided it was not in Odin’s best welfare to continue using him as an animal ambassador. You can still him in his habitat in the raptor loop, however, enjoying his retirement and watching you from the safety of his house!
~Sara 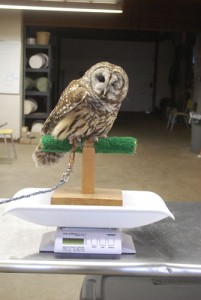 The Barred Owl is progressing well in his training.

We have done a little rearranging here at the Bird Sanctuary with our raptors. The pair of Red-Tailed Hawks on the lakeshore was moved to the second pen in the raptor loop and the Barred Owl was moved off exhibit so I can train him to be used in education programs. This is a process that can take months to accomplish, and he has already been showing much improvement.Our Barred Owl would often fly away from caretakers when they entered his pen. With just a few weeks of a new routine in a new area, he will now sit in one spot when we enter and clean. Introducing the glove was a bit more challenging, but he will now sit on my gloved hand as I walk around. We have begun venturing outside of his pen and into the building, where he is working on being walked through doorways, going into a crate, being weighed, and getting used to being around more people. 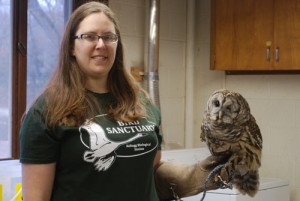