You are here: Home / About / History of the Sanctuary / The Changing Sanctuary Landscape

When the land for the W. K. Kellogg Bird Sanctuary was first acquired, it was nothing more than farmland, devoid of trees and with minimal wetlands. Early settlement had resulted in the destruction of the original natural habitats. Many extensive changes took place to create the various ecosystems necessary for housing the local wildlife as well as assisting in the rehabilitation of the Canada Goose and the Trumpeter Swans. 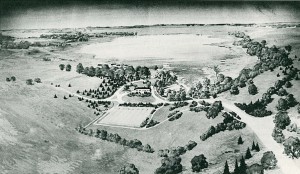 One of the first changes was the planting of trees. Under the direction of the Sanctuary’s first director, George Corsan, upwards of 4,000+ trees were planted. Additional trees, shrubs and other vegetation have been planted since in order to uphold the integrity of the Sanctuary’s ecosystems.

Another change that took place was the evolution of Wintergreen Lake. The lake, originally formed by a melting block of glacial ice, is in the path of many waterfowl migration patterns. Originally, the lake gave way to marshy wetlands. Over time, the land was dredged and the water level raised. The lagoon, which is seen at the beginning of the Visitor’s Path, was added as was the small inlet of water that runs under the bridge between the outlook and the Birds of Prey.

Finally, bridges were added and buildings were added, removed and moved. Most notable is the footbridge spanning the lagoon of Wintergreen Lake. The Sanctuary museum that was once directly alongside of the Lake was torn down and replaced by the “new” reception area that includes an auditorium, offices and restrooms.

The completed breakwater replaces an old dock, providing closer and safer access to the birds. Spruce Lodge was added to the opposite side of the lake and is still in use today, being rented out for events. With a generous donation from Sanctuary members and Consumers Energy, an overlook walkway was added to the front-most part of the lake, off of the current Overlook Museum. The Museum itself was built on the site of the old Director’s house. Along with the buildings, of course, came the various housing structures for the birds of prey, the railings along Wintergreen Lake to protect the wildlife habitat, and the Leslie E. Tassel game bird structure.