You are here: Home / Avian Care / Caring for Crows

Last fall, a local wildlife rehabilitator informed us she had received an injured crow into her care. She was found in Comstock with a badly broken left wing and was deemed un-releasable by the veterinarian. We decided she would make an excellent addition to the sanctuary and after our permits were approved, we picked her up just after the New Year. About a month later, the wildlife rehabilitator called again to say she had gotten in another crow with a similar wing injury. Since crows are very social birds, we were thrilled that we would be able to give our other crow a friend. We named them using the Potawatomi language. “MigwIn” means feather and “Ogama” means chief. 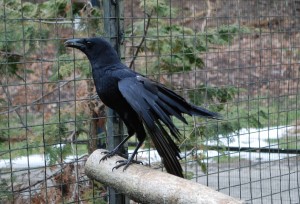 MigwIn and Ogama are settling in nicely and MigwIn can be seen in the Tassell Gamebird pen. Ogama is still going through a 30 day quarantine before being introduced to MigwIn. The Sanctuary wants to make sure all of our birds are healthy when they first arrive here. During quarantine they are monitored for diseases or parasites.  Ogama will hopefully be out of quarantine by the end of April. Since MigwIn and Ogama have never lived together, they will be slowly introduced to each other to make sure that there are no conflicts. They will reside in the Tassell Gamebird pens after that introduction.

Crows are highly intelligent, so the Avian Caretakers make sure they have daily enrichment. Enrichment is anything that they wouldn’t receive normally, like toys and new props. When you visit them you may see paper tents, parrot toys, or cereal boxes for them to play with. Their favorite enrichment items are also the messiest, like hay and shredded paper! MigwIn is still nervous around people and may hide from you, so when you do come for a walk please try to refrain from loud noises. Check back to meet Ogama in April! They are quite active and fun to watch!