The Eastern Massasauga Rattlesnake is Michigan’s only venomous snake. It lives in wetland habitats throughout Michigan’s Lower Peninsula. Chances are, even if you’re from Michigan you’ve never seen one of these snakes. In fact, Eastern Massasauga populations are so low that the snake has recently become federally protected. If you were to come across a Massasauga you should know 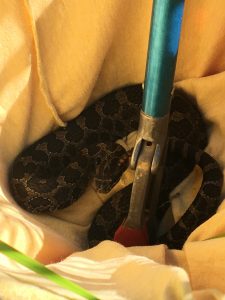 that although these snakes are venomous, they are not prone to striking. Most bites come when the snake has been provoked, either when people are trying to catch the snake or trying to kill it. It is also important to know that the Eastern Massasauga has the least toxic venom of any rattlesnake in the US, but if you are bitten you should seek medical attention as quickly as possible. If you did want to see a Massasauga, you would want to visit a marshy wetland area in the early morning when they will be sunning themselves to get warm.

A group of students from the Kellogg Biological Station (KBS), including the two Kellogg Bird Sanctuary Interns, went to Pierce Cedar Creek to sample these rare snakes. Pierce Cedar Creek is a nature center located in Delton, MI, and part of the property is a perfect wetland habitat for Eastern Massasaugas. The KBS students met with GVSU researchers Arin and Caleb, who were working for Dr. Moore on a project to study the genetic diversity of the Eastern Massasauga population in this area. KBS students created a special Massasauga call to attempt to coax the snakes out of their perfect hiding spots. After several calls, and several bad snake song puns, the students were able to find and capture five Eastern Massasaugas! Once caught, the snakes were put into individual pillowcases, and transported via buckets back to the field station for further processing. 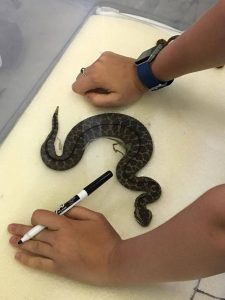 Researchers measure the length of the snake by placing it under Plexiglass.

Back at the field station, Arin and Caleb demonstrated how they process the Massasaugas to the KBS students. The first step was to put the snake into a tote with foam lining, and then press a Plexiglas cover over the snake to “squish” it.  When squished, Arin traced the spine of the snake with a dry erase marker to accurately measure its length. After this, the snake was coaxed into a tube so that it wouldn’t be able to bite anyone while it was processed more in-depth. While the snake was in the tube, Arin and Caleb recorded the length of the rattle, sexed the snake, and took a blood sample for genetic testing. If the snake hadn’t been captured before, Caleb would tag them with a microchip similar to one that your dog or cat may get. Caleb also marked the base of the rattle with nail polish so that recaptured snakes could be more easily identified. Once all the snakes were processed, Arin and Caleb released them back into their environment and they slithered off under the afternoon sun.