Do you ever hear noises in the night and wonder if an owl could be living in your backyard? Or even what kind of owl it could be? Do you enjoy nature or purely love owls?  If you ask yourself these questions, you need to go owling! Owling is the observation of owls in their natural habitats.

The 3 most common types of owl in our area of southwest Michigan are the Great Horned Owl, Barred Owl, and Eastern Screech Owl.  Where might you find an owl? Most owls do not migrate and can be found in the same territory throughout the year. Many owls live in suburban areas as well as forest edges near agricultural areas of which will support plenty of mice and other prey for owls, in wooded habitats, and sometimes along the banks of a river or other actively moving source of water. Calls are heard mostly near the nest holes, which males defend against predators. Screech owls nest in cavities and they will not only breed in backyard nest boxes but may roost in them at other times of the year. While you may see a Great Horned out on a tree limb, smaller owls will be disguised inside tree cavities. Keep in mind they have excellent camouflage contrary to the bright songbirds you may be used to. Instead of looking at the trees for these birds that may blend in too well, it might be more productive to look down for pellets, whitewash, and other signs to tip you off to an owl’s presence. 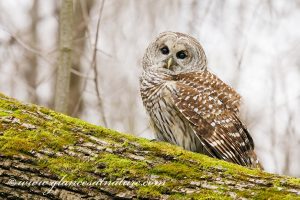 Early winter is the perfect time to be on alert for owls because that’s when they call to attract mates and define territories. Owls in general will define their nesting site and choose their mate earlier than other raptors. More specifically: Eastern Screech Owls will be most vocal from mid-January to the end of March, Great Horned Owls will be most vocal from mid-September to early April, and Barred Owls will be most vocal from January to mid-April. Great Horned Owls often are sitting on eggs by January! Another factor to consider is what time of day you should be going out. Barred Owls are quite vocal during the day. Their call sounds like “who cooks for you, who cooks for y’all” while the Eastern Screech Owl has a long tremulous call that sounds like a horse whinnying. If you happen to hear a higher pitched hoot, especially with Great Horned Owls, this could mean you are hearing a female. Typically, though, your best shot at hearing owls means going out in the early morning or the evening. Many owls are crepuscular which means they are active primarily during dawn and dusk. 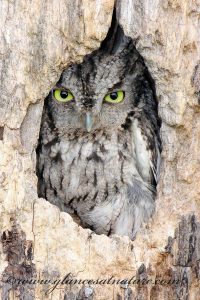 A few more final helpful tips! Owls tend to be more vocal when the moon is bright, and you’ll be able to better see where you’re going. Sometimes if you listen for crows, jays and chickadees, they, along with other residents of the winter woods, will mob daytime roosting owls. Lastly and most importantly, use birder’s etiquette and be respectful of the owl or any bird you are trying to find.  Always be sure to keep quiet, keep your distance, listen carefully, look closely, stay safe, minimize lights, and minimize recordings. If an owl acts in a manner that you perceive as nervousness such as looking toward you and away repeatedly, then back off. The bird’s survival is more important than your perfect shot of their beauty.