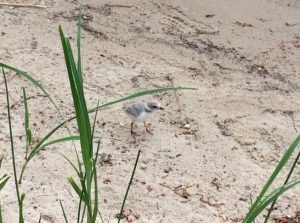 A Piping Plover explores the lakeshore. Photo by Sara DePew-Bäby

A tiny shorebird chick, only a few days old, is eating insects along a beach. An adult in the area suddenly makes an alarm call and the chick quickly runs to some rocks and lays down. The young bird, camouflaged, cannot be seen by approaching predators. Once the threat is gone, the chick pops back up out of the rocks and continues the search for insects.

In 1986, there were only 17 nesting pairs of the Piping Plover, Charadrius melodus, remaining in the Great Lakes region. This endangered species is under threat from habitat loss, predation, and conflicts during migration, and human disturbances such as pets off leash in nesting areas. Scientists found that some plovers were abandoning their eggs, and they realized that salvaging these abandoned eggs could contribute significantly to the species’ recovery. A recovery program was established by the United States Fish and Wildlife Service. 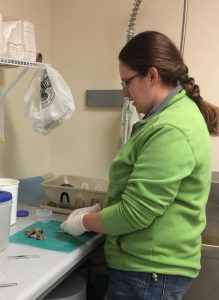 Each summer, zookeepers from around the country travel to the University of Michigan Biological Field Station to participate in the recovery program, organized by the Detroit Zoological Society, for this endangered species. I had the opportunity to join the team in July, participating in the incubation and hatch of abandoned eggs and caring for the tiny chicks until they could be released to join wild Plovers. Days began at the first feed, either 6:00 or 7:00 a.m. depending on the chick’s age, and ended after the last feeding at 9:00 p.m. 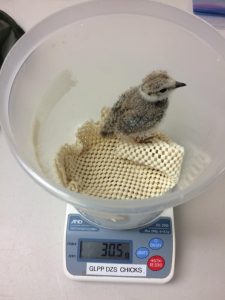 The Piping Plovers are weighed each morning. Photo by Sara DePew-Bäby.

Each chick is weighed every morning to calculate the percentage of weight gain. We want to make sure the birds are gaining enough weight, but not growing too fast. Feedings occur every few hours and the birds are given black worms, smelt, fruit flies, calciworms, mealworms, and crickets. Once the chicks are old enough, they are taken outside during the day to a lakeside pen where they can run on the beach and look for wild insects. They are released on beaches of the Great Lakes when they are 35 days old, just in time for the migration to Florida.

Due to the Great Lakes Piping Plover Recovery Effort, the population of this tiny shorebird is now about 75 breeding pairs!  The birds raised under human care and their descendants have made a significant contribution to this small population. That is a huge gain for such a tiny little shorebird!