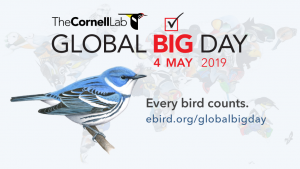 On Saturday, May 4th, thousands of birding enthusiasts across the globe will identify as many bird species as possible in one day, hoping for a new world record. There are approximately 10,500 bird species in the world; last year, just over 7,000 species were counted, which is over 2/3 of the world’s birds seen in a single day! 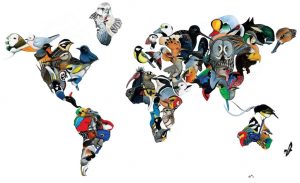 This event, Global Big Day, was first held in 2015 by Cornell University. A leader in wild bird science, Cornell manages the website eBird.org and tracks the data to better study and conserve bird populations. One group of avid birders, “Team Sapsucker”, would travel the globe each year to a different destination. Their goal was to count as many species as possible in that area. In 2015, they invited the world’s birding community to join them, in an effort to find 4,000 species. That goal was met and surpassed, with the end tally being 5,827 species! Each year since that first event, the number of species identified breaks the previous year’s record.

Whether you venture out for a few hours or only a few minutes, it’s easy to join in! To participate, simply create an eBird.org account if you do not already have one, count the birds you see and hear, and input your data. You can even watch in real time as bird counts come in and share what you’re seeing using #globalbigday in your social media! As a part of eBird you are not only having fun, but you are also contributing to very real and important bird science.