On Monday, May 13, a special surprise arrived at Oregon’s Sunriver Nature Center from the W.K. Kellogg Bird Sanctuary. A male Trumpeter Swan, injured in the wild and unable to fly, was on his way to meet his new mate, a female named Grace that had also been injured in the wild. Flying the skies at over 500 miles per hour, via Delta Cargo of course, the male was introduced to his new home and immediately appeared quite taken with his new friend. 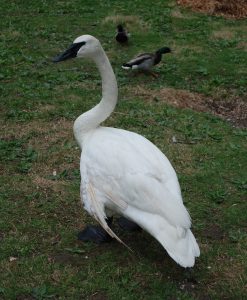 The male Trumpeter Swan at the Kellogg Bird Sanctuary.

Grace had been alone since Thanksgiving Day in 2017, when her mate Chuck was illegally shot by a poacher. The loss of Chuck was devastating not only for his caretakers at the Nature Center, but also to Oregon’s Trumpeter Swan reintroduction program. Each year, Chuck and Grace’s cygnets were released in a nearby wildlife area where they could go on to find mates of their own. 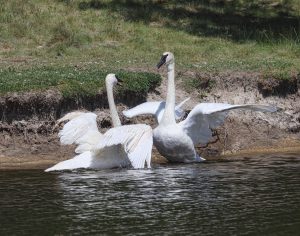 The pair together at last! Photo by Tom Lawler.

After seeing an article shared from the Trumpeter Swan Society stating that the nature center was still looking for a male, we immediately reached out and began planning the move. Two months later, the plan was complete when the pair was finally together. We are excited to aid in Oregon’s species recovery and find it fitting that Grace’s new mate would come from the Sanctuary, since Chuck spent time here before being moved to Sunriver Nature Center!

While we are familiar with success in Trumpeter Swan reintroduction in Michigan, from zero in the early 1980s to over 3,000 in our state today, other states like Oregon are still working towards species recovery. We hope our male and his new mate live long lives and are able to contribute their future cygnets to Oregon’s population of Trumpeter Swans!