A little shorebird has made quite the headlines in Chicago this summer, cancelling a popular beach music festival and bringing in bird watchers from all over the Great Lakes. What bird could cause such a commotion? 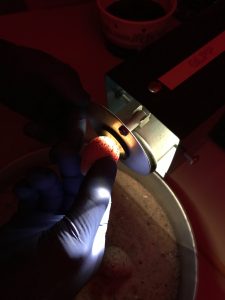 A pair of endangered Piping Plovers have nested and hatched chicks on Montrose Beach for the first time in over half a century. This is a remarkable event for a species that has had a few rough years in terms of low population growth. Since 2003, zookeepers and other animal care staff from around the country have traveled to the University of Michigan Biological Station to incubate abandoned eggs and raise the chicks to be released back into the wild. In the wild, an average of 1.5 eggs make it to fledge from a four-egg clutch, about a 37% success rate; we have a success rate of over 95% and to date have released over 250 Piping Plovers into the wild! There really is a team at work here, doing their best to save an endangered species. Some of us have more experience than others with either incubation or chick rearing, but all of us have the same goal: to save the Piping Plover. 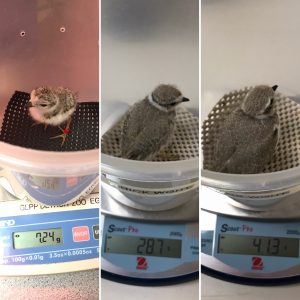 Weighing chicks as they grow. Photo by Sara DePew-Bäby.

Over two trips north to UMBS, I spent my second summer as part of the Great Lakes Piping Plover Conservation Team and my first as a supervisor on duty. The supervisors are responsible for keeping the records updated, communicating with the coordinator on important decisions regarding the chicks, and staying in contact 24/7 in case eggs need to be transported from wild nests to the rearing center. Days begin before sunrise and end well after sunset, usually 6:00 am-10:00 pm, and any chicks with access to the outside area need to be checked overnight. Over the course of 16 days, I spent a total of 225 hours working to ensure these little birds would grow up healthy. 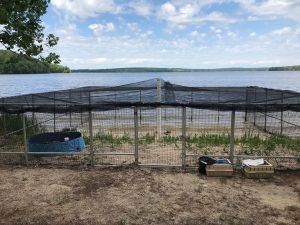 The eggs are incubated for about 30 days before they hatch. When the tiny chicks emerge they weigh only a few grams. Keeping them in an ICU for a few days helps us closely monitor eating habits and weight gain. Watch my video of one-day old chicks to see them in the ICU. After a few days they are moved to a slightly bigger area on sand, where they spend the days basking under the heat lamp and chasing insects. Once the chicks are old enough, they are taken outside during the day to a lakeside enclosure where they can run on the beach, look for wild insects, and eventually take their first flight, all while being protected from potential predators. The birds are then released on beaches of the Great Lakes when they are 30 days old.

“When will they reach adult size?”
“How many have you raised this year?”
“Why they are endangered?”

During a recent tour, I was asked many questions about the birds under our care. The Piping Plovers reach adult size about 25 days of age, just before they are released at 30 days. This year we have raised 22 chicks to fledge, meaning 22 chicks have been or will be released into the wild! The bird’s biggest predators are merlins, ravens, gulls, and dogs. Humans and our beach activities are the reason these little birds are having such a hard time in the wild. Their little eggs appear to be rocks and can be hard to spot if you are walking along the shore. That is why it is increasingly more important to keep your dogs on leashes and stay away from areas marked as a plover nesting site.

The three tiny chicks you have seen in the video I produced are now over halfway grown and will be released in mid-August. As for those Piping Plovers in Chicago? The latest update I received said there were still two chicks, chasing insects and doing well with their parents keeping a close watch.