Home » Winters Past and Present

Recently, a W.K. Kellogg Bird Sanctuary volunteer gifted a treasure trove of vintage copies of Michigan Audubon’s “The Jack Pine Warbler” to the Sanctuary. To my surprise, upon reading the table of contents of an issue, an article from 1947 by former Sanctuary director, Dr. Pirnie, was listed. Upon reading it, I found it remarkable how little and how much has changed in the last 72 years.  The article, about winter falling on the Sanctuary, seemed perfect to share at this time of year.

“November is fall to us, for many ducks and geese are still migrating; but, in December, when the lake freezes and the larger goose flock deserts us – that is winter.

Relatively few ducks “board” with us in winter, but usually you will find at least 50 Mallards and an equal number of Black Ducks.  During the day, they are greedy for the grain scattered on the ice or in the shallows.

At present, the swan flock of 34 birds includes only the Whooper and Mute species – the “yellow-bills” and “red-billed’ swans. They are very fond of lettuce and celery trim we get at the A&P store and of course they compete with the ducks for a share of the grain. 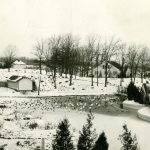 The only water hole in Wintergreen Lake is often less than 30 feet across.  In cold weather, we keep it open by cutting ice and sliding the cakes underneath.  In average winter temperatures, the swans serve as ice-breakers; and soon after the sun is up, they free the pool from the skim ice that has formed in the night.

“But how do they keep their feet from freezing?” you may ask.  Well, snow is good insulation, and so are the body feathers and down.  In zero weather waterfowl lie in the snow with their feet under their flank feathers for real comfort.  In storms they turn their bodies toward the wind and tuck their beaks under their shoulder feathers.  In this way they lose little body heat and keep comfortable even in the worst blizzards.

Also, they keep their feet warm in ice water!  Did you ever swim when the air was colder than the water?  If so, you found it more comfortable to keep under, didn’t you? Well, on zero days, especially if there is no snow on the ice, the birds seem to get cold feet when out of the water, and then are likely to spend much time in bathing.  After all, the water never gets colder than 32 degrees F.  The webs of water birds’ feet are especially well supplied with many, fine blood vessels; and a duck picked out of the water will be found to have warm feet, unless it is sick.  So don’t worry about them in winter, at least as regards suffering from the cold.

Disease is another story. In cold weather, sick geese or ducks seldom survive.  Last December when the large flock of nearly 3,000 Canada Geese left for the South, quite a few sick ones were left behind; and in the next three weeks about 30 dead geese were found at Gull and Wintergreen Lakes.  Sick ones brought in eventually died even though fed well, for they were not suffering from lack of food, but from lead poisoning.  This is not just a facetious way of saying they were being shot at out-of-season; lead poisoning is a disease caused by digesting lead shot picked up perhaps by mistake for gravel or seeds.  Dr. S. C. Whitlock, pathologist for the Michigan Department of Conservation, autopsied number of these dead geese, and “poisoning by lead’ was his verdict in all cases.”

Some of the changes over time are striking. The American Black Duck population has decreased in this area. Habitat changes in breeding and wintering grounds have negatively affected this species. The Mallard population has skyrocketed and hundreds will “board” with us for the winter.  Our swan flock is now mostly wild Trumpeter Swans, our native-to-Michigan swan, and not the exotic Whooper and invasive Mute Swans. 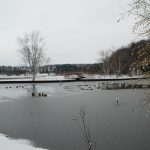 Thankfully, we now have aerators to keep portions of the lake open and we don’t have to chip ice everyday (just on the really cold ones!).  Waterfowl have to have access to open water to access food sources in the winter months.  By hunkering down and conserving their resources, they can survive off their stored fat layers in a severe cold snap, but will need to replenish those resources to survive the long months of winter.

And even though 72 years have passed since Dr. Pirnie wrote this article, lead poisoning is still a great concern for our waterfowl populations. Lead is toxic to wildlife and people and its use needs to be controlled.  Lead shot and sinkers are still used for hunting and fishing in Michigan with no restrictions. With strong education on the implications of using these items, we can change this.  More lead free ammunition is becoming commercially available and use copper, steel, bismuth and tungsten instead. Check out huntingwithnonlead.org for more information on alternatives to lead ammo and loon.org for non-lead fishing tackle suppliers.

Take a moment to think of all the changes the world has seen since 1927: So much has changed, from the way we communicate to how we travel. We went from looking at the moon to landing on the moon. Looking back over our 92 year history, we can see changes in not only the Sanctuary lands and its surrounding communities, but also changes worldwide. We have experienced massive declines in bird populations around the world due to pesticide use, loss of habitat, etc.  All from human impacts.

The Sanctuary continues to be a safe place for birds. It has grown to be a place of education and a shining example of helping visitors understand their natural world a little bit better.  Hopefully, planting a seed of what they can do to make their world more of a Sanctuary, every day.

What changes have you observed at the Sanctuary through the years?

Lisa Duke is the Sanctuary Manager and has a passion for sharing the history of the W.K. Kellogg Bird Sanctuary after sifting through boxes of documents and other historical items on site here in her attempts at organization of over 90 years of collected items.