You are here: Home / Conservation / Learning from your elders: long-term research at KBS provides insights in turtle populations

You wouldn’t think of turtles as particularly likely to succeed in the game of life – unlike many common species (think bugs and mice), they grow slowly and take a long time to mature and reproduce—up to 20 years for some species. What turtles have going for them, however, is their amazing toughness.

And it’s not just the shell, a modification of their skeleton formed by expansion of the ribs, that makes them tough. Turtles also can survive spending a Michigan winter under lake ice without taking a breath, and hatchlings of some species survive freezing solid in their nests over the winter. Tortoises can survive long periods without water, and sea turtles can travel hundreds or even thousands of miles from feeding areas to nesting sites.

Another fascinating aspect of turtle biology is that many turtles do not have XX and XY chromosomes like us—instead, their sex is determined by the temperature at which their eggs incubate! These amazing adaptations have helped turtles to survive for over 200 million years and to persist through two mass extinction events, including the one that destroyed the dinosaurs. 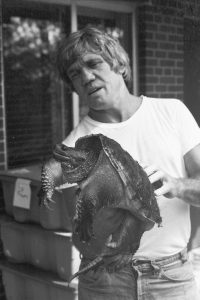 Although turtles are long-lived and tough, many turtle populations are in decline. Urbanization and development are big problems for turtles, since raccoons, foxes and skunks—all animals that can thrive in areas with lots of human habitation—love to dig up turtle nests and eat the eggs. In areas with many roads, female turtles often get hit by cars on their way from marshes and ponds to the dry-land habitats where they lay their eggs. Because changes in temperature can affect the sex of hatchlings, many researchers who study turtles are also concerned that hotter summers will affect turtle sex ratios, potentially even creating populations that are all female.

The long lifespans of turtles, however, can make it difficult to determine how turtle populations respond to changes in their environment and how quickly turtle populations are declining. Long-term research can be extremely useful to determine how turtle populations are changing over time. For example, a long-running study at the University of Michigan’s E.S. George Reserve found that rates of nest destruction increased from approximately 55% from 1976-1984 to almost 97% from 1985-1991. Populations like these, which have a lot of adults but very little successful reproduction can appear relatively stable even though they are not viable over the long run. 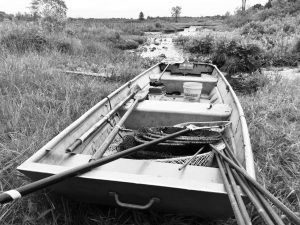 A view of the marsh from the collection boat

The W.K. Kellogg Biological Station, which hosts both a Long-term Agricultural Research site and a Long-term Ecological Research site, is also the home to a lesser-known but extremely significant long-term turtle study. In 1965, J. Whitfield Gibbons, then a Ph.D. student at Michigan State University, began capturing and marking turtles (focusing on painted turtles) at a site known as Sherriff’s Marsh, now Garside Marsh, which is located on private land about 2.5 miles east of the Station. Dr. Gibbons received his degree from MSU in 1967 and moved on to a position as a research scientist and professor at the University of Georgia, but returned during multiple summers between 1971 and 2000 to continue the study. The years of work Dr. Gibbons put in to this study provided many insights into turtle biology, helping us to understand what turtles eat, how growth rates vary across environments and years, and how long turtles live. Interestingly, painted turtles in Garside Marsh tend to eat more plants and grow more slowly than turtles in other habitats, and growth rates have changed over the years (possibly due to periods of drought). Painted turtles in Garside marsh are also smaller on average but had denser populations than in any other site previously studied. 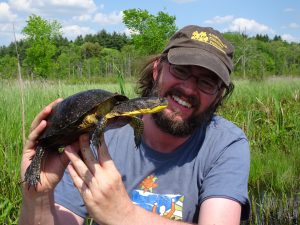 Dr. Brendan Reid with a Blanding’s turtle – check out that yellow neck!

I arrived at KBS in early 2018 to work on threatened fish populations with Dr. Sarah Fitzpatrick, but I had worked extensively with turtles in Wisconsin for my Ph.D. I was excited to find that the Garside Marsh study happened just a few miles away, and I started to think about the possible questions we could answer by revisiting this site. Would we still find any of the turtles Dr. Gibbons had marked? How has the population changed over time? Have different species of turtles grown more or less common over time? And what could more modern methods tell us about the ecology of the turtles? I got in touch with the current owner of the site, John Garside, and found an undergraduate student, Al Nichols, who was interested in working on the project with me.

Al and I began to re-survey the marsh in May 2018. In the past I had mainly used traps (including large aquatic hoop nets and smaller minnow and catfish traps) baited with fish-flavored cat food to catch turtles. But we soon learned that turtles in the marsh aren’t that fond of fish, potentially because they’re more vegetarian, as Dr. Gibbons had suggested). Instead, we found that the best way to catch them was simply to paddle through the marsh in a rowboat and use a long-handled net to scoop up turtles swimming near the surface. This was easier said than done—turtles can be very quick swimmers when they want to!—but we got the hang of it pretty quickly. The vast majority of the turtles we’ve caught in the marsh are the relatively common painted turtles, which are easily recognizable by the red, orange and yellow stripes on their heads and legs. But,  we’ve also found a number of Blanding’s turtles, which have bright yellow throats and a shell that can open and close like a box turtle’s, as well as a few small, feisty musk turtles and dinosaur-like snapping turtles as well. 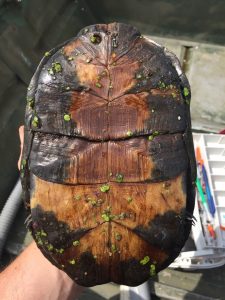 Underside of a marked Blanding’s turtle – note the hole drilled in shell. This turtle was marked in 1983!

Each time we caught a turtle, we would weigh, measure and photograph it. We would identify the sex of each turtle by looking for certain telltale characteristics. Male turtles have long, thick tails, for example, while female turtles have short, narrow tails. In painted turtles, males have long claws on their front feet that they use in courtship displays to attract females. In Blanding’s turtles, the plastron (bottom part of the shell) is also curved inward, while it is flat for females. Dr. Gibbons used a system of marking turtles that involved making a pattern of notches in the shell using file or a hand drill (which doesn’t harm the turtle – remember, they’re really tough!). We would look for any marks on the turtle, and if they were not marked we would mark them using the same system Dr. Gibbons used. Finally, we’d take a small blood sample from each turtle and then let them go on their way.

Al and I worked through July 2018 and then returned in the summer of 2019 with two additional students, Juhi Parekh and Marggie Glenn, to continue the study. Over these two years, we caught almost 400 turtles in the marsh. These included a number of recaptured turtles that had been marked in Dr. Gibbons’ study in the 1980s and one marked in the 1960s, making these turtles at least 40 and potentially more than 60 years old! By looking back at the data over time, we found that young male and female turtles were born at approximately equal rates. However, the number of female turtles in the population declined in the 1980s before rebounding in recent years, possibly due to emigration out of the marsh or lower survival rates compared to males. We also used blood chemistry to show that turtles in Sherriff’s Marsh likely still have different diets than turtles in other sites, although they may be eating less plants and more animal prey than previously thought. 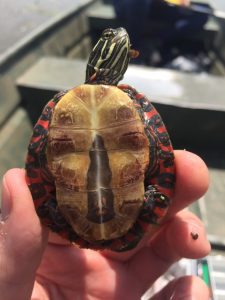 A juvenile painted turtle – note the growth rings (or annuli) on the shell. This turtle is probably one year old

Long-term studies like these are essential for tracking how turtle populations change over time and for understanding and reversing population declines. Unfortunately, the current COVID-19 pandemic is making it difficult for many scientists to continue these long-term projects this year. Although I could not return to the marsh this year, several KBS researchers are planning to catch more turtles this summer.

With many people spending more time at home and outdoors this spring and summer, we have a great opportunity to help out turtles or even start your own mini-study. You can look around your local marsh or pond and note how many turtles you see basking on a sunny day, and you can upload your observations of turtles to a citizen science app such as iNaturalist. You can also keep an eye out in the mornings and evenings this time of year for female turtles wandering around on land looking for sites to lay their eggs. If you see a turtle in the road and you can safely assist it, you should move the turtle in the direction that it is facing to the other side. Small actions like these can help us monitor turtle populations and can help turtle populations persist in a changing world.

Dr. Brendan Reid is a postdoctoral research in the Fitzpatrick Lab at KBS. He uses population data and genetics to better understand how to conserve cold-blooded creatures, including turtles and fish.