You are here: Home / Bird Sanctuary / Vagrant Birds: What’s That? 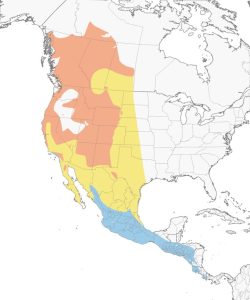 Have you ever seen a group of people with binoculars looking very excited and trying to find something? It is possible they are looking for a vagrant bird. But what is a vagrant bird? A vagrant bird is a species that is currently outside their wintering and breeding area. For example, a bird like the Western Tanager (Spanish name: Piranga carirroja), that breeds in Western Canada and Northern US and spends the winters in Mexico or central America (see map from allaboutbirds.org). If someone spots one far from its typical migration route, let’s say in Michigan, this Western Tanager becomes a vagrant in Michigan. Because it is a species that we wouldn’t expect in Michigan very often, birders in the area become eager to see it. For some people, it is also a way to increase the number of bird species they have seen that year. If you haven’t seen the movie The Big Year I suggest you watch it. I still remember my first vagrant bird, it was a Blackpoll warbler (Spanish name: Reinita estriada), a common species in Michigan during migration, but a bit crazy to see in Idaho where we banded it at the Intermountain Bird Observatory. 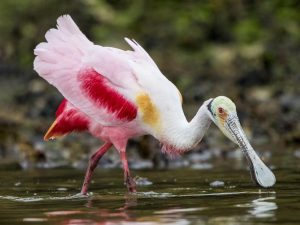 Some of the vagrant birds found in Michigan that were discussed in the December 2021 Birds and Coffee Chat are the Roseate spoonbill (Spanish name: Espátula rosada), Little blue heron (Spanish name: Garceta azul), Cattle egret (Spanish name: Garcilla bueyera), Ash throated flycatcher (Spanish name: Copetón cenizo), and Royal tern (Spanish name: Charrán real americano). I invite you to check out eBird and explore common Michigan birds as well as vagrants. My personal favorite is the Roseate spoonbill, other than looking like a beautiful dinosaur, they have vibrant red and pink feathers, kind of like a flamingo. And like flamingos, they get their color from little organisms they eat found in shallow waters that contain carotenoids, a pigment also present in food humans eat like carrots and pumpkins. 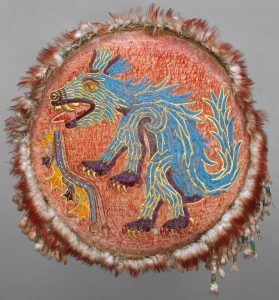 It is amazing to think that a bird that lives mostly in Latin America and Southeastern US, and such an important species for pre-Columbian cultures has been seen in Michigan. For the Aztecs, the feathers from spoonbills were used to decorate objects, headdresses and shields like the one in the Museum of Ethnology in Vienna.

But why do some birds fly far from home?

It is incredible how every year, millions of birds find their way back to their nesting and wintering sites. In 1964 a few migratory sparrows that breed in Northwestern Canada and winter in the San Jose area (CA) were displaced to Baton Rouge (LA) and to Laurel (MD) the following year. Both years, and although being on opposite sides of the country, they found their way back to San Jose*. While researchers still don’t have a clear answer and the causes for vagrancy might be different among species, there are a few causes that can make birds fly outside their range. Some, especially long-distance migrants, might get disoriented, like if they had a broken compass. Other species might be expanding or changing their breeding ranges possibly due to climate change or get pushed to a different area due to storms.

But what is so exciting about vagrant birds? Well, for me, the excitement can feel like seeing a brown bear in Michigan. It is always fun to see new species! Have you ever seen a vagrant bird? Would you like to learn more?  Consider being part of the online Out of Bounds Birds: Migration and Vagrancy program that starts on January 25th.  Please share with us and visit the Kellogg Bird Sanctuary! Who knows what the next vagrant bird will be!