Our hearts as heavy, as Howie passed away on May 18th. He lived with us for a year and a half and as his age was unknown, he was most likely an old man who enjoyed his final years at the Sanctuary. Even with his passing, there are many other birds to care for and enrich, and our staff appreciate your support. 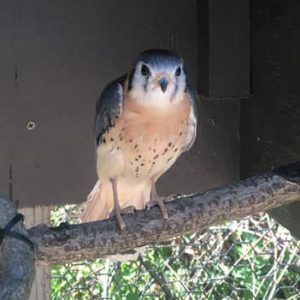 On Halloween 2018, we added North America’s smallest falcon, the American Kestrel, to our raptor family at the sanctuary! Howie came to us from Vicksburg, after being hit by a car and spending some time with a wildlife rehabilitator. The tip of Howie’s wing had to be amputated, so he is unable to fly. Since his arrival, he has stayed in an area away from the public. But in early May, he moved to his new habitat near the red barn that houses the Sanctuary’s resident Barn Owl.

The American Kestrel is North America’s smallest falcon and one of the most diminutive birds of prey in the world. They also are vividly colorful. Kestrels are sexually dimorphic in size and color, which means the males are smaller than the females, and they each differ in color. Males have a rusty and slate-blue coloration on their feathers, with black stripes on their face. Females, on the other hand, are rusty colored with barring on their feathers, and they have grey on their heads with black stripes on their faces.

These high-energy falcons are known to use the hovering technique in flying, like a helicopter, when they are hunting their prey. Native to Michigan, American Kestrel populations have been declining over the past few decades due to increasing pesticide and rodenticide use in their habitats. Because Kestrels eat a variety of small animals, including birds, insects and mice, they can become sick after eating prey that has come into contact with those pest control methods. 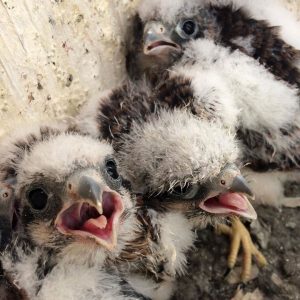 Kestrel chicks in the nest box, 2017. Photo by Sara DePew-Bäby.

The spring of 2017 marked the first successful hatching of wild Kestrel eggs, in nest boxes at the Kellogg Farm and Dairy. Watching the development and growth of the small chicks that grew up to be powerful little predators was a thrill. We know that visitors to the Sanctuary for years to come will be just as thrilled by seeing Howie!

Looking for a way to welcome Howie? Consider donating an enrichment gift that he’ll enjoy–a muffin tin, some sisal rope or a Kong-type rubber toy are good choices. Or, join the flock and become a Sanctuary member!

Sara DePew-Bäby has been the animal caretaker at the W.K. Kellogg Bird Sanctuary since July 2014. She has a bachelor’s degree in zoology and environmental science from Miami University and has over 20 years of experience in animal care.