Who is North America’s smallest falcon?  The American Kestrel! Did you know that these birds are not only one of the smallest birds of prey, but also one of the most colorful? These fierce little birds are native to Michigan, but you probably didn’t realize their populations have been declining in the past few decades. 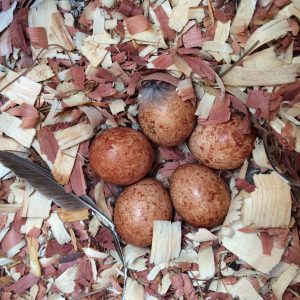 Kestrel nest boxes were installed on the grounds of the Kellogg Farm and Dairy (thanks to a wonderful donation!) in hopes of attracting a pair to breed and raise offspring. We were thrilled during the summer of 2017, when we went for our weekly nest check and found eggs!

We were even more ecstatic when they hatched and we were able to watch the five little fluff balls grow up into little powerful predators. Kestrels eat a variety of small animals, including birds, insects, and mice. They use the hovering technique in flying, like a helicopter, when they are hunting their prey. We are looking forward to this summer, where we hope to have more hatchlings! 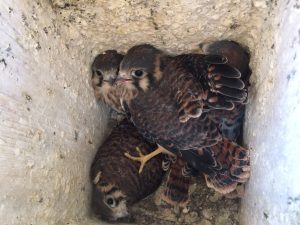 Kestrel chicks all grown up and ready to fly! Photo by Sara DePew-Bäby

For the spring Dessert with Discussion, on Monday March 26th, the Kellogg Biological Station will host Dr. Catherine Lindell and Dr. Phil Howard, who have been studying Kestrel populations and their relationships with fruit orchards. Researchers are trying to answer the question of why they are declining, which could be a result of pesticides, climate change, or an increase in predators. This event is free, but registration is required in order to attend: https://www.kbs.msu.edu/events/dessert-with-discussion-falcon-friendly-orchards-benefit-fruit-growers-and-consumers/